Is The Trinity Biblical? 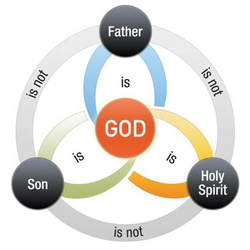 You do not find the phrase Trinity in the Bible but looks to originate from the Catholics, but the doctrine of the Godhead, where Jesus said baptize in the name of the Father, Son and Holy Spirit, you can find three distinct Individuals outlined in the Bible. So its up to you what word you want to use. We don't see any harm in referring to Them as Trinity or Godhead. We cannot fully understand God with our sinful minds using only 25% of our brain. There are so many references to the 3 that make up 1, not only in Matthew 28:19 that we just quoted, but if you go to 2nd Corinthians 13:13,14 in his conclusion he says, All of the saints salute you. The Grace of the Lord Jesus Christ, and the love of God, and the communion of the Holy Ghost be with you all. So there you have another example of those three Entities that the Bible speaks of.

When Jesus was baptized is another great example where you can see these three separate Entities. Our Christ, Son of God, came out of the water at His baptism. The voice of God the Father said, this is My Beloved Son. Matthew chapter 3. Then the Holy Spirit descends in the form of a dove. Now you have three distinct Persons that are making up God.

For there are Three that bear record in Heaven. The Father, the Word, and the Holy Ghost: and these three are one. 1 John 5:7

Now some people get confused and they asked, &#8220;these three are one? How can They be three in one? All you got to do is remember that in ancient Hebrew, one meant unity.

In Genesis, it tells us God said, Let Us make man in Our Image. And later when man sinned, God said, man has become like Us. So you find all the way from Genesis to Revelation the teaching of God being described as 3.

The Angels say, Holy, Holy, Holy for each member of the Godhead there in Isaiah chapter 6.

So now ask yourself: Is the Father, Jesus, and the Holy Ghost the same person? The answer is no and this is why. Because obviously when Jesus prayed at His baptism to the Father in Heaven, He's not praying to Himself. And when the Holy Spirit came down upon Him, you have got three separate personalities doing three separate things.

Moses put it very well. Hear Oh Israel, the Lord of God is One.&quot; Moses also wrote, &quot;A man leaves his father and mother and cleaves to his wife, and they become one. Well that oneness in the Bible does not always mean it's one numerically. In John 17:11, Jesus prayed that the Apostles might be One, even as He and the Father are One. One means unity. So that's one point. Now do you see how in the Hebrew text "one" doesn't mean a numerical number. It means unity.


Now they are obviously 3 different entities. Jesus while on earth prayed to His Father in heaven. Jesus was not a ventriloquist. He was talking to His Father, and His Father answered Him. In the gospel of John, the disciples say, "We heard the Father answer Him."


Jesus always directed His prayers to heaven towards the Father and stated that the Father had His own individual will.


Father, if thou be willing, remove this cup from me: nevertheless not my will, but thine, be done. Luke 22:42

This indicates the Father has a separate presence.In fact, Jesus said that He was not the Father more than 80 times. While always remaining one in purpose and origin, Jesus and the Father are clearly separate and distinct persons. And on more than one occasion, the Father spoke to Jesus from heaven. And suddenly a voice came from heaven, saying, This is My beloved Son, in whom I am well pleased. Matthew 3:17

Either Jesus and the Father are two separate individual persons, or Jesus was an expert ventriloquist.The Scriptures also teach that only God knows the thoughts of a man's heart. 1 Kings 8:39

Yet Jesus consistently knew what people were thinking, for he knew what was in man. John 2:25 Nathanael said to Him, How do You know me? Jesus answered and said to him, Before Philip called you, when you were under the fig tree, I saw you. John 1:48 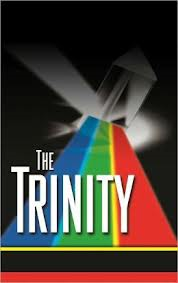 $0.00
Add to Cart
The doctrine of the triune Godhead is under attack from all corners of Christianity. Understand the history behind this dangerous assault and know the biblical support for this great mystery found in both Testaments. You will see the nature of the Godhead and each being in a new, fascinating light, and you will find peace with a fundamental truth important to all believers.