Are You Gay And Proud Of It?

Sexual Sin Is WRONG, Gay or Not.


The woman shall not wear that which pertaineth unto a man, neither shall a man put on a woman's garment. For all that do so are abomination (disgusting, detestable, or loathsome) unto the Lord thy God. Deuteronomy 22:5

It has become a well known fact that we have Proud Adventists that are homosexuals. Just google gay Adventist and you will sadly find the proud gay Adventists. This is like saying "I'm a proud lying Adventist, or I'm a proud Adventist adulterer, or I'm a proud killer Adventist!" Its ridicules to be proud of your sins!!!! Being proud of anything is a sin, we are to be humble and shameful for who we are because we are like filthy rags. We sin over and over again and we allowed the rulers of this world to destroy Jesus, the son God sent to us to save us from ourselves. Jesus said if you love me follow my commandments.  If your proud to be perverted then you make your god Satan happy. Click on the YouTube video below and watch the Doug Batchelor sermon on homosexuals. He will explain what a huge sin it is to be a proud homosexual.


You say: "God made me gay, I was born Gay. I am tired of the daily battle so I give in to my desires. Why not Jesus died for me on the cross." So does this make it OK? No, it does not. What about the person born with the killing instinct. The kid gross up disturbed and slaughters many. He says I'm tired of the constant battle so I'll give into my desires and kill people. Aren't you glad Jesus didn't give in to all the temptations the devil threw at him? He went threw all the struggles in life we go threw and many more. The devil had Jesus in his cross hairs. Jesus was born with a target on his back. Yet he never gave up the battle. The people who will have God's seal on their forehead will be the people who are still constantly fighting the devil and his temptations. They may fall a few times but they will never accept that they are who they are and live their lives the way the devil tempts them to to ease their tempting pains. Homosexuals and sinners who make excuses that what they do is right will not be in heaven. Only the homosexuals and sinners that are constantly battling their sins and asking for forgiveness will be in heaven. Not the ones who give up and try to ease their guilt by making excuses for their sins as Adam and Eve did when they first sin. Adam says, "THIS WOMAN YOU PUT HERE WITH ME GAVE ME THE FRUIT AND I DID EAT." Eve says, "THE SERPENT YOU CREATED TRICKED ME AND I ATE THE FRUIT." If this is you then you need to repent and recognize your sin as sin. Keep fighting the urges to sin. Don't give up and join hands with the devil to help him spread his sin to the world by helping him make up excuses why its OK to marry the same sex and why the same sex should have the same rights as anyone else. This is creeping compromise and you are aiding the devil in his work. WAKE UP and save your souls before its to late. PROBATION is almost closed!


Therefore a man shall leave his father and mother and be joined to his wife, and they shall become one flesh. Genesis 2:24

Did Jesus say anything about homosexuality? Of course, when asked about marriage, Jesus issued a sweeping condemnation of all sexual relationships outside of the male/female model established in Gen 1:27, which he specifically cited.

The Pharisees also came unto him, tempting him, and saying unto him, Is it lawful for a man to put away his wife for every cause?  And he answered and said unto them, Have ye not read, that he which made them at the beginning made them male and female, And said, For this cause shall a man leave father and mother, and shall cleave to his wife: and they twain shall be one flesh?  Wherefore they are no more twain, but one flesh. What therefore God hath joined together, let not man put asunder.  They say unto him, Why did Moses then command to give a writing of divorcement, and to put her away?  He saith unto them, Moses because of the hardness of your hearts suffered you to put away your wives: but from the beginning it was not so.  Matthew 19:3-8


Though most of the passages deal with the male perspective, for the first time there is a specific mention of female homosexuality in the book of Romans.  And as the verdict comes in, we discover it too is a depraved condition brought on by a sinful nature.

For this cause God gave them up unto Vile (morally evil, wicked, repulsive, disgusting, degrading) affections, for even their women did change the natural use into that which is against nature. And likewise also the men, leaving the natural use of woman, burned in their lusts (cravings) one toward another. Men with men working that which is unseemly, (indecent or improper) and receiving in themselves that recompence (repayment, reward, compensation) of their error which was meet. (proper, fitting, suitable) Romans 1:26,27


The only passage of scripture that clearly acknowledges former (ex) homosexuals in the church. They are listed along with other ex-sinners who have been changed by the power of Christ. It is certain that Pastor Paul knew there were former homosexuals in his local church and he celebrated their freedom in Christ Jesus. With a completely different tone in comparison to the volume of harsh, negative reaction to the unrepentant homosexuality, scripture here ends with the tremendous hope and goodness of God.

Know ye not that the unrighteous shall not inherit the kingdom of God? Be not deceived: neither fornicators, nor idolaters, nor adulterers, nor effeminate, nor abusers of themselves with mankind, Nor thieves, nor covetous, nor drunkards, nor revilers, nor extortioners, shall inherit the kingdom of God.  And such were some of you: but ye are washed, but ye are sanctified, but ye are justified in the name of the Lord Jesus, and by the Spirit of our God.  1 Corinthians 6:9-11

I saw that God's order has been reversed, and His special directions Deuteronomy 22:5: "The woman shall not wear that which pertaineth unto a man, neither shall a man put on a woman's garment: for all that do so are abomination unto the Lord thy God." God would not have His people adopt the so-called reform dress. It is immodest apparel, wholly unfitted for the modest, humble followers of Christ. There is an increasing tendency to have women in their dress and appearance as near like the other sex as possible, and to fashion their dress very much like that of men, but God pronounces it abomination. "In like manner also, that women adorn themselves in modest apparel, with shamefacedness and sobriety." 1 Timothy 2:9. Ellen White, Testimonies For The Church Volume One page 421


Church members need to fast and pray, striving earnestly to overcome by the blood of the Lamb and the word of their testimony. Not one particle of Sodomitish impurity will escape the wrath of God at the execution of the judgment. Those who do not repent of and forsake all uncleanness will fall with the wicked. Those who become members of the royal family and form God's kingdom in the earth made new, will be saints, not sinners. Isaiah 30:1-3, 8-16. Ellen White, Testimonies on Sexual Behavior, Adultery, and Divorce page 119


The Sodomitish practices which brought the judgment of God upon the world, and caused it to be deluged with water, and which caused Sodom to be destroyed by fire, are fast increasing. We are nearing the end. God has borne long with the perversity of mankind, but their punishment is no less certain. Let those who profess to be the light of the world, depart from all iniquity. Ellen White, Testimonies on Sexual Behavior, Adultery, and Divorce page 120


They have all styles of dress here. Some are very becoming, if not so short. We shall get patterns from this place and I think we can get out a style of dress more healthful than we now wear and yet not be bloomer or the American costume. Our dresses according to my idea should be from four to six inches shorter than now worn and should in no case reach lower than the top of the heel of the shoe and could be a little shorter even than this with all modesty. I am going to get up a style of dress on my own hook which will accord perfectly with that which has been shown me. Health demands it. Our feeble women must dispense with heavy skirts and tight waists if they value health. Brother Lockwood, don't groan now. I am not going to extremes, but conscience and health requires a reform. We shall never imitate Miss Dr. Austin or Mrs. Dr. York. They dress very much like men. We shall imitate or follow no fashion we have ever yet seen. We shall institute a fashion which will be both economical and healthful. Ellen White, Manuscript Releases Volume Five page 380 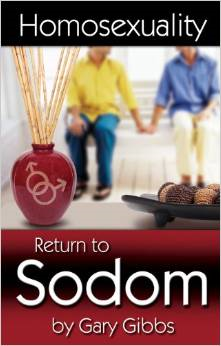 $0.00
Add to Cart
Everywhere you turn, popular media portrays homosexuality in a positive light-and condemns everyone who say it's immoral, including Christians and the Bible. But Gary Gibbs answers this challenge with an eye-opening look at the radical acceptance of the homosexual lifestyle in our culture and how it affects you, your family, and the church.

Do both the Old and New Testaments declare homosexuality a sin?
How does God feel about homosexuals? Can they be saved?
Discover how homosexual advocates are preparing the world for not just tolerance, but total acceptance of their lifestyle choices.