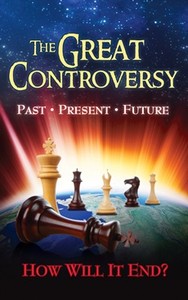 Since the beginning of this Earth's history there have been two supernatural powers contending for Supremacy of the world: one seeking to establish a kingdom built on laws of love and truth; the other, on the laws of selfishness and deception.

This warfare, involving the entire world, touches every life.  In fact, this earth has become the final battleground where the powers of evil and the powers of good have met to demonstrate before humanity whose right it is to rule the expanse of creation.  These two contending powers are poised, and the great and final battle, the battle to end all battles, is about to take place before our very eyes.

The Great Controversy unveils these two forces at work in human history and in the events that are soon to change the course of this world forever.

With laser-light accuracy The Great Controversy will: Illuminate the dark modern deceptions; Unveil the real thief of our freedoms; Reveal the refuge for the great coming crisis.