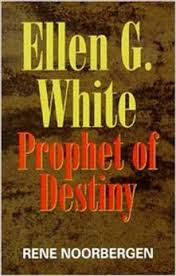 SKU:
$0.00
Unavailable
per item
In April, 1906 Ellen G. White was granted a vision foreseeing the destruction of the city of San Francisco. Two days later, an earthquake struck, leveling the city. Once again, Ellen G. White had somehow seen into the future.

Since girlhood, she had had more than 2,000 visions, revealing truths of religion, history, medicine and nutrition, often foreshadowing scientific discoveries yet to be made. Inspired by these visions and her sense of the presence of God, Ellen G. White worked throughout her life, first to help found the Seventh-day Adventist Church, then to spread its word around the world. She lived to see it become one of the major religious forces of our time; and during her lifetime, wrote more than fifty books which have been translated into one hundred languages and sold in the millions of copies. All of this she accomplished in the face of dire poverty, with no formal schooling beyond the third grade.

Rene Noorbergen's bestseller is a full and fascinating portrait of a truly remarkable, yet strangely little-known woman.